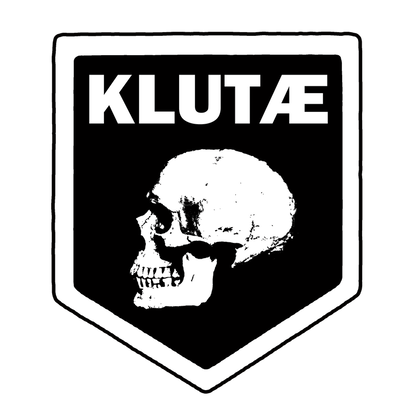 Claus Larsen launched this solo-project in the early 90's under the name Klute, but changed its spelling to KlutÊ in order to avoid any further confusion with a totally unrelated drum n' bass project.

KlutÊ's first releases showcased a rather heavy and turbo-driven distorted sound which brought him comparisons to metal-industrial acts like Fear Factory, Bile and Swamp Terrorist, yet Claus Larsen has always considered this project as his most eclectic and unpredictable outlet. So it was no major surprise seeing its hardest walls of synthesized guitar noise eventually giving way to mid-tempo pounding tracks powered by the LeÊther Strip trademark EBM bass-lines and Claus' chameleon vocals.

KlutÊ is loud and fun, and will musically certainly not deceive the LeÊther Strip fanbase, while keeping its appeal to followers of the Ministry gang for its aggressive attitude. It's dense aggro-electro from the tortured soul of Claus Larsen's bastard alter ego.

Android Lust has been an incomparable presence on the post-industrial landscape for over twenty years. Formed in 1996 by Shikhee D’iordna, Android Lust sheds old skins and grows new limbs with each album, incorporating novel instrumentation and sound manipulation into her œuvre. Android Lust is often danceable but always transcends the dull simplicity of four-on-the-floor; often moshable but never constrained to radio-ready tropes. Song structures and album sequences never go quite where one would expect. Even the one constant, Shikhee’s voice, exhibits a startling variety of forms, ranging from rasping whispers to spectral shrieks.

The debut album Resolution was released in 1998 and established Android Lust as a talented new presence in the Northeast scene. Her 2002 independently-released sophomore album, The Dividing, sold out in two months, attracting the attention of monolithic goth and darkwave label Projekt Records. Projekt reissued The Dividing in 2003 and released the followup, Devour, Rise and Take Flight, in 2006. The pair earned rave reviews and gained Android Lust a dedicated fanbase, a prominent mark on the map of dark electronic artists, and even a by-name mention on hit CBS show NCIS. Lead singles from each album, “Stained” and “Dragonfly”, were accompanied by music videos directed by Daniel Ouellette.

After intensive touring and a period of artistic recharging, Android Lust returned in 2010 with The Human Animal, which was self-funded and released directly through the artist’s new Synthellec Music label. The Human Animal incorporated the use of manipulated field recordings gathered around New York City. After a cross-country move to Los Angeles, Android Lust released 2012’s Crater, on which traditional compositional forms took a backseat to ambient soundscapes. Berlin, a spiritual successor to Crater released in 2017, used samples collected by Shikhee in the German capital. Both albums were funded through Kickstarter and released on Synthellec.

Android Lust has performed with legendary underground acts such as Killing Joke, My Life With The Thrill Kill Kult, and Leæther Strip while national tours have brought her before audiences across North America. In 2018, Android Lust toured the UK, contributed title and credit tracks to survival horror video game Agony, and performed at Terminus Festival in Calgary. Android Lust's evolution continues in 2019 with new tour dates on the way.
check out android lust

Ego Likeness was created in 1999 by artist Steven Archer, a DC native, and writer Donna Lynch in Baltimore, Maryland. Taking their name from Frank Herbert’s classic science fiction novel 'Dune', the band began as an experimental/ dark trip hop project. A demo called ‘Songs From a Dead City’, recorded on a four track, was released in 1999.
By 2000, Archer and Lynch were moving the project in a darker electronic/ dance direction, resulting in a self-released full-length album entitled ‘Dragonfly’.
CHECK OUT EGO LIKEness

There you have it: a band releases an absolute electronic masterpiece of an album only to practically vanish into thin air afterwards. This is what happened to IRIS, the American duo that issued Electro Pop manifest "Blacklight" in 2010. On the succeeding US-tour however, Andrew Sega and singer Reagan Jones fell out with each other, so the project was put on hold - actually forever. What followed was a long period of silence in which each musician went his own way. At one point though, a small spark was ignited when Reagan Jones sent Sega sketches for three songs. This spark rapidly grew when the two decided to work on another studio album yet again. As the songs took shape, became distinctly more dense, powerful and sophisticated, an album title came up: "Radiant", remembers Andrew Sega. "It is the story of a man who all of a sudden sees his world within a new environment and realises how bright and radiant it can truly be, if one looks upon it with different eyes." With "Radiant", IRIS have been reborn, so to say, which also explains the warmth and radiant quality of the album cover, which comes in bright colours, maybe even the feeling at its core, which is best described by attributes such as "warm", "flattering" or "harmonious". And even though the compositions carry an air of Zen-like calm and pliability, at least after several listens, "Radiant" captivates with one quality which many other albums in this genre lack: depth. Reagan Jones' vocals lead Andrew Sega's harmonious electronic arrangements and not only give them emotion, but also a feeling one would rather associate with the old 4AD classics: an Ambient-like poise, warmth and sparkling quality of which you can hardly get enough.
check out Iris

Born in the bowels of the infamous Chicago industrial scene, PROJECT.44 combines direct ties to the legacy of a town that birthed an original sound and fresh ideas to keep the torch burning.
Featuring the skills of Industrial legends Louis Svitek (Ministry/RevCo) and Charles Levi (Thrill Kill Kult/Pigface) along with longtime producing mate, Hate Dept.’s Seibold [The System Doesn’t Work, Revolution] and guests like En Esch and Martin Atkins - with founder Chris Harris, means the core experience of this machine based assault is a doctorate degree in industrial music.

After a decade on the venerable Invisible Records, PROJECT .44 moves to WuLi/In Grooves Records for the release of their new single & EP: REVOLUTION and PROJECT .44 VS EN ESCH

PROJECT .44 has toured the country multiple times sharing the stage on tours with Thrill Kill Kult, Lords of Acid and Pigface and also headlining the Propaganda Tour; and Revolution Campaign. PROJECT .44 has also played numerous indie, punk, metal and industrial festivals including: CMJ in New York, Gothstock in Hartford CT, Thunder of Gods in Austin TX, Dwell in Darkness in Dayton OH, and Gothic Fest in Chicago.
check out PROJECT .44

Shock Horror Industrial Noise with Power Vox and Plenty of GORE describes us best....otherwise, there is no way to accurately define the sounds produced by this quartet. The best thing you could do is LISTEN. Better yet, catch one of our live shows, which is nothing less than exciting.
check out murder weapons