Mount Rushmore. Just outside Keystone, South Dakota. Not exactly an industrial hotbed I would assume, but stay with me. In 1927, four US presidents were chosen due to their “role in preserving the Republic and expanding its territory” to have their faces immortalized in the granite of the Midwest’s Black Hills. I’ve never visited – although I’ve heard that they are much smaller than you’d think. Story of my life…
Anyway, just what the hell does this have to do with anything? Well I got to thinking; the men chosen to be represented in the sculptures were considered to be the four most influential politicians when it came to forming the structure and foundation of America, right? So – what if we did this for INDUSTRIAL MUSIC in America? Who are the most influential and recognizable faces of ‘our thing’? Who would be the “Mount Rushmore” of industrial – the men that, if removed from existence entirely, would result in us not having most of the amazing music, art, and aesthetic that we enjoy today.
And NO I did not steal this from the ID:YD podcasts where they discuss their personal ‘Mount Rushmore’ of artists important to them – I swear I thought of this a year ago but I’m ultimately lazy and now I look like a thief. I swear I’m not.  J
I thought about this for several hours in a boring ass car ride and ultimately came up with this:
BEHOLD MOUNT INDUSTRIAL-MORE? MORE-INDUSTRIAL? (such a shitty name so sorry about that but I wasted all my brain power on the article itself) – let’s just go with the Mount Rushmore of Industrial 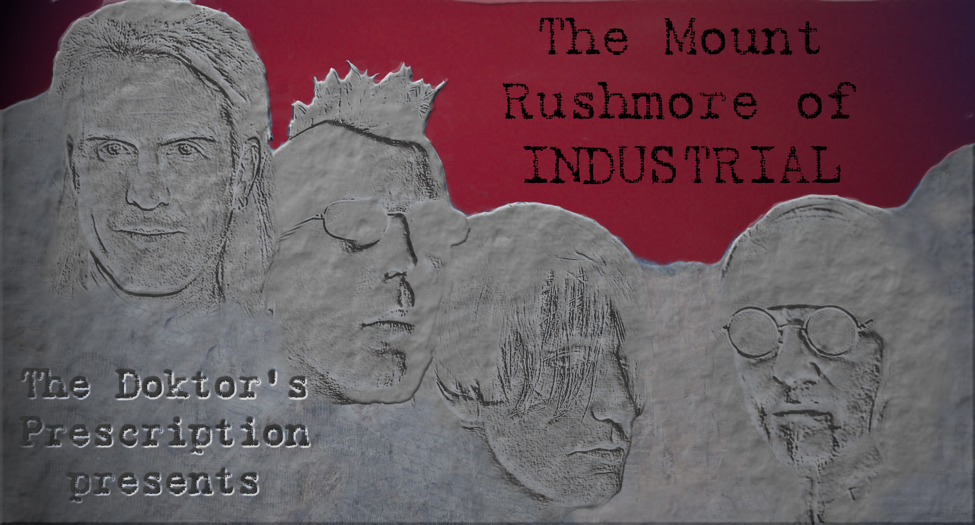 OGHR – The Twisted Voice of Skinny Puppy
This one is pretty obvious; industrial music was always a form of expressionist aural art, and that led naturally and progressively into visual art as well. When we think of a certain type of music, our minds conjure up visuals that correlate to that genre based on our experiences. Oghr and Skinny Puppy really took that to the next level, creating something that felt almost unnatural and unreal at times. Musically, the band is complex and noisy and their songs range from catchy to noise – sometimes on the same record! Without Oghr, industrial music wouldn’t have had that cryptic edge to it; that abstract beauty that only a handful of people understand. It’s like a complex wine for rivetheads.
Obviously without Oghr, there’d be no SP, which means there’d be no FLA, which pretty much kills a heavy portion of the bands influenced by these pioneers. And yes, technically SP existed in its earliest form WITHOUT Oghr, but can you really envision them without his bizarre stage presence, cryptic lyrics, and unnatural growl? Oghr made it ok to be weird and different. Skinny Puppy inspired future artists that sometimes it’s OK to put your visual art and message and delivery ahead of traditional song structure, instrumentation and vocals. He helped pave the way with the idea to ‘say it your way in your voice, even if your voice is a little fucking strange’ – which is the backbone of industrial in itself.

TRENT REZNOR – The Mastermind of Nine Inch Nails
Just don’t call his music ‘industrial’….even though that’s exactly what it is. Trent is by far the most famous face of industrial and can be pretty much solely credited for any mainstream coverage that industrial music and the scene gained throughout the years. NIN was a gateway to a whole different musical world for many, and Trent was influenced very early on by scene pioneers such as Depeche Mode and the above mentioned Skinny Puppy. Striking early gold with ‘Pretty Hate Machine’ and releasing an ever-evolving series of albums over three decades has put Reznor on the map as a rock music legend, but his avant-garde approach to making music has always had its roots in the industrial scene.

When you try to explain ‘industrial music’ to those uneducated of the scene, isn’t “similar to Nine Inch Nails” the easiest fallback? It’s not just because Trent and NIN carry the most recognizability, but also because the music carries all of the basic elements of what industrial (and various sub-genres of industrial) is all about – harsh, unnatural instrumentation, a rebellious punk attitude, embracing of machines and the sounds you can rip from them, and unnerving visuals. Not only that, Trent brings a true musician’s legitimacy to a genre of music that many may consider to be ‘noise’. Dude won an Oscar and a Grammy and screamed “FIST FUCK” in a song. That’s pretty industrial right there.

SASCHA KONIETZKO – The Kapt’n of KMFDM
This one may bring about some debates, but I’m a bit of a homer and this is my article so just follow along. Sascha embodied the ‘attitude’ of industrial (which had a lot of roots & similarities to punk rock in its earliest phases, and carries a lot of that attitude to this day). He carried a ‘DIY’ spirit and message that resonated with the listener – something you could march to and get behind without needing things to be overly complicated or cryptic. KMFDM also brought the European flavor to North America, as the band members were from different parts of Europe originally (and still are to this day). Also – let’s be honest – how awesome has the ‘BRUTE!’ artwork always been?
Kapt’K had the recipe for ‘industrial’ and followed it consistently for years, creating and pioneering an anthem-based industrial rock/electronic hybrid that has survived the test of time. KMFDM were true masters of the ‘industrial aesthetic’, mixing punk, military, goth, and European style together into a true scene melting pot (which garnered them mainstream attention in the early 90s).The band had brought so much to the table for so many years that for their influence to be replicated, it could have taken 15 different bands and artists to recreate. Without the ‘ultra heavy beat’, there would probably be less ‘regular heavy beats’ in the scene today.

AL JOURGENSEN – The Crazy Uncle from Ministry (and then some)
Last but not least, we have Al. Considered to be a true ‘jack of all trades’ in the scene, Jourgensen was the poster child for industrial music’s tendency to create more projects and more styles based on what the artist wanted to express at the time. Ministry is obviously the most famous and longest lasting of these, but even they were a synthpop act when they started, before fully embracing the industrial rock elements and going on to achieve MTV airtime and mainstream rock success on the back of the industrial foundation – attitude, image, and a bit of darkness with hints of something more sinister.
Ol’ Buck Satan has directly (and indirectly) influenced more scene musicians than anyone before him due to his tireless work and constant presence and seemingly endless side projects. Al and Ministry (and his second most well-known project Revolting Cocks) were a massive part of the early success of Wax Trax records, responsible for the US record releases of non-American scene bands such as Front 242, <PIG>, Front Line Assembly and VNV Nation. Wax Trax also built an industrial hotbed in Chicago, IL which spawned even more scene legends. We have our crazy Uncle Al to thank for sparking this fire.

And there you have it. Our founding fathers. The blocks on which our great industrial nation was formed. At least in this asshole’s humble opinion. Keep in mind, this is not necessarily the reflection of what some of these artists are CURRENTLY doing (I think the last Ministry album I bought was in 2001 and I’ve listened to KMFDM’s most recent release approximately ONCE). All of these bands found their way into the mainstream ear at some point (some more than others) because of their sheer force of presence and belief in what they were doing, not to mention the talent and vision to back it up. They ​embodied their respective corners of what has always been a small scene and at some point the world HAD to take notice, if only for a little bit. Without that exposure, who knows how many bands and artists may never have found THEIR spark and discovered that there WAS something out there for them, leading to endless valuable contributions to the music we have loved for years and continue to love to this day.
Think of it this way – if you could mash all four of these men together into one, you’d have the ultimate Voltron Megazord of Industrial, representing just about every element that makes our scene rock – which sounds like the most amazing and fucking awesome thing ever. Maybe I should have Photoshopped that instead?